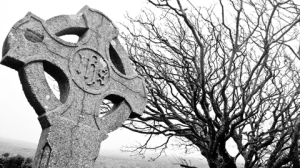 By: Melody Worsham
What do the Ancient Romans, the Celtics and the Catholics have in common?  If you guessed “Halloween,” you’re correct!  This holiday that we associate with pumpkin carving, costumes and spooky tales has a very complex history involving some very different and fascinating societies; and goes back nearly 1,500 years.
In 532AD, the Roman Empire ruled over Celtic lands – the land of Pagans now known as Ireland.  Although Romans were Christians at this time, they still celebrated their ancient rituals of “Feralia” commemorating their deceased loved ones in the dead of winter, and honoring Pomona, the goddess of fruit-bearing trees, right after they were left barren from their autumn shedding of leaves.  The Celtics believed that at the last day of their calendar year, October 31st, the wall between life and death was its thinnest, and the living were vulnerable to vicious pranks and attacks from the restless souls of the departed.  Catholics, at the time, used the end of the harvest to honor the saints of years past.  Although the three societies were vastly different, they all had an emphasis on death in their holidays and rituals in common.  So, the Roman Empire and Catholic Church decided to blend the holidays in an effort to unite the people under its vast rule.  The Catholic Church believed that combining ancient Pagan rituals with Christian holidays would encourage more allegiance and more financial support to the Church.
Catholics celebrate All Saints Day on November 1st.  The night before is called All Hallows Eve, or “Hallow E’en,” which is where we get the name Halloween.  The Church moved their day to commemorate the dead to November 2nd, and it was celebrated with all of the traditional trappings of a Celtic honoring of the dead called Samhain (pronounced SAH-WIN).  People donned costumes disguising themselves as dead souls and danced around roaring bonfires.  The revelers bobbed for apples to honor the goddess of the fruit trees.  Roman Feralia, usually held in February, was moved to the same day as Samhain so that all the empire’s subjects would celebrate together.  In modern days, only Mexico and Latin America honor their dead on the traditional Feralia day in February.  It is called The Day of Dead, or “Día de los Muertos,” and it is another example of how the Catholic Church blended ancient holidays with Christian beliefs in an effort to convert the “heathens” (a.k.a. non-Christians).  The Aztecs had been dining with their dead ancestors for hundreds of years before the Spanish discovered their land and brought their own traditions.
Irish Samhain folklore tells the story of Stingy Jack, a man who invited the devil to drink with him, but refused to pay.  So the devil turned himself into a coin with which to buy the next rounds.  Jack, being stingy, put the coin in his pocket next to a silver cross which prevented the devil from turning back into his original form.  Jack finally made a deal with the devil that if he would take him out of his pocket he had to promise not to take his soul.  Years later, when Jack died, the devil refused to let him into Hell.  But Heaven wouldn’t take Jack either, so his soul was doomed to roam the countryside, using a tallow candle inside of a carved out turnip to light his way.  He has been known as Jack of the Lantern, or Jack O’Lantern, ever since.  The scary faces carved on our pumpkins today are to scare away spirits like Stingy Jack who might play tricks on the living.
By 800AD, preparations for the Celtic New Year included going from house to house asking for bread, cakes and goodies to be offered up so God would hear their prayers to release them from any curses with which they might have been burdened over the last year.  If a house refused to donate food, they were subjected to a night of pranks, practical jokes, and terror.  Today, we call this tradition “Trick or Treat.”  Black cats have always been considered the embodiment of restless souls.  They were feared and left alone.  If a black cat crossed your path as you travelled during Samhain, death was imminent for you or a family member.  This fear that the dead had so much power and influence caused many to seek the counsel of a Wise One, now known as a witch.  These old women had herbs and compounds to procure healing, and they could reverse bad spells cast by the malicious dead.
Halloween rituals travelled to the New World with their believers, and they are an integral part of American culture today.  Much of the religious meanings of Halloween have faded, but honoring the Saints has remained a Catholic holiday even today, and Druids still consider the night to be a solemn one.  Whatever your favorite activities are on Halloween, know that you are carrying on a tradition that has its roots in the Dark Ages.  Pumpkin carving has become an amazing art form and costume parties are the mainstay for today’s revelers.  So sprinkle the night with scary stories, and plenty of practical jokes, and don’t forget to put the candle in your window to keep some wandering soul from moving in with you!  Boo!